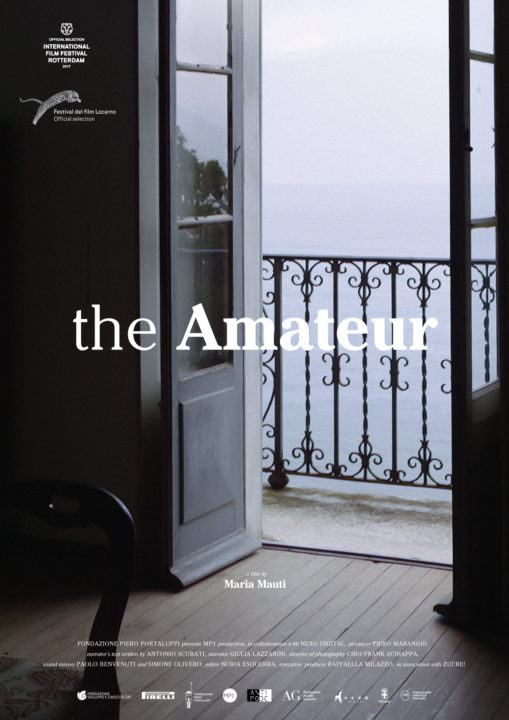 “…what has always been necessary to me: to look inside a man, what feelings move him, what thoughts, through his journey towards happiness or unhappiness or  death” – Michelangelo Antonioni

When more than ten years ago one of Piero Porta- luppi’s great grandchildren, Piero, who was named after him, discovered the hundred reels inside a trunk, I was given the task to watch the material. Nobody knew what was on the film. I approached it not knowing what I might find with the same discre- tion we feel when we find somebody’s secret diaries and we ask ourselves if we have the right to enter their lives. At the same time, we are seduced by the opportunity of being able to look into someone’s in- nermost intimacy. I watched the footage on an old Moviola, noting down the places, the dates, the titles Portaluppi had given me through his captions. And soon I realised that the reels had been edited so that someone would watch them. To the extent that the content could be recreated even without the pres- ence of the filmmaker. Except one, a private gift to a lover who was present, with all the others.

For these past few years, the feelings I got from the images I had watched have always been with me. I carried around the sense of pleasure and solitude they had left me with, the feelings that this visual material had given me of the man. A vibrant vitality, the desire to invent and construct, the incapacity to express his feelings, the rules of a social class, the detachment, the irony, the seduction, the sen- sation of death that transforms his face and makes him look thoughtful in the colour reels. In the back- ground, we witness the arrival of a new era and the regime it brought with it. History walks relentlessly alongside the events of the man. A grand and tragic era that leads to the collapse of illusions, both col- lective and personal. That era in history, the disaster of the regime and the consequences on the lives of individuals, reopens a stinging cause for reflection on our own present. A world that repeats itself like a tangle of contrasts and questions is what the film wants to confront.

The film begins with the visions of man and an era that stuck in my mind, and from the desire to bring to the surface that which for years had been buried.

Portaluppi is a powerful and controversial figure, full of light and shadow. We want to portray his per- sonal side, “to look inside the man”, but respect the mystery surrounding him. And Portaluppi provides all the magnificence and weakness of a social class that is rarely talked about; the upper middle- class. He is the emblem of a city, Milan, which in the film is seen through a different point of view from the conventional one. He represents the values of a country that struggles to change, which is resistant to change. And he is the epitome of the artist, in- cluding the mysteries, who at a certain point loses his creativity.

The 16 mm film and the architecture are the pre- cious materials for the staging of the memory, im- agination, time and space, with which to rethink the present. 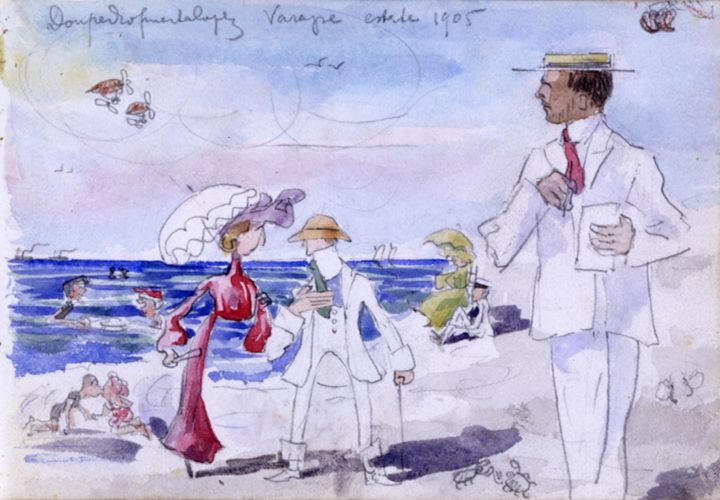 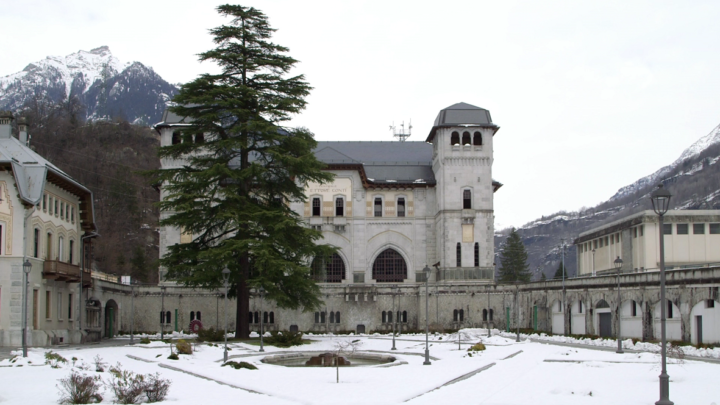 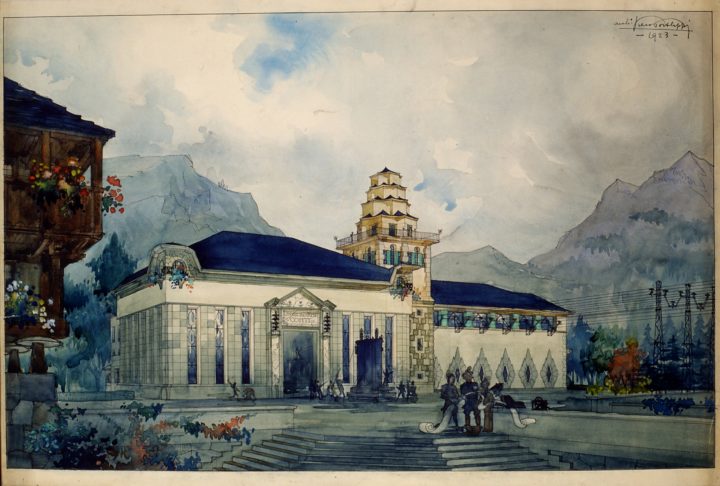 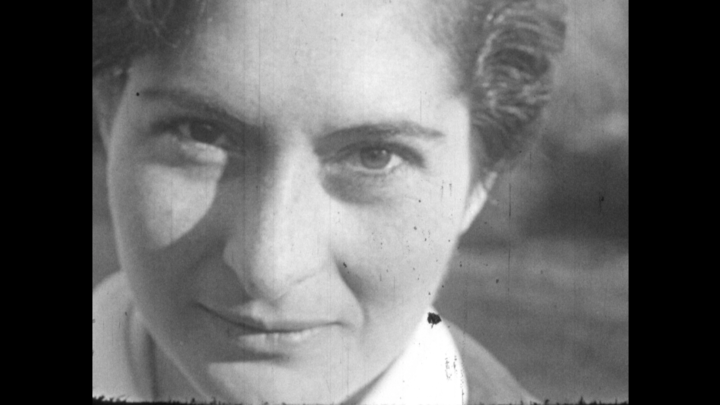 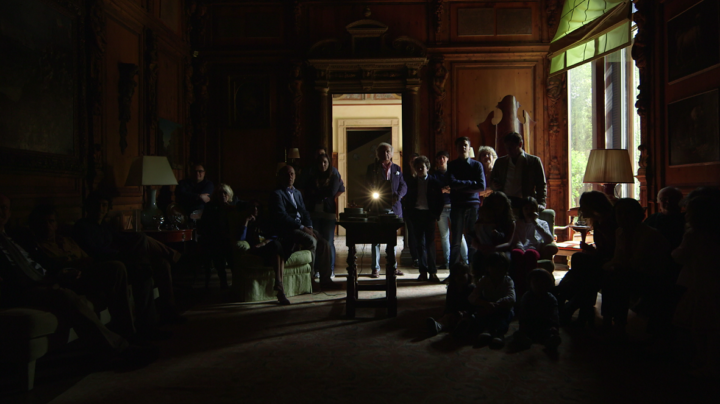 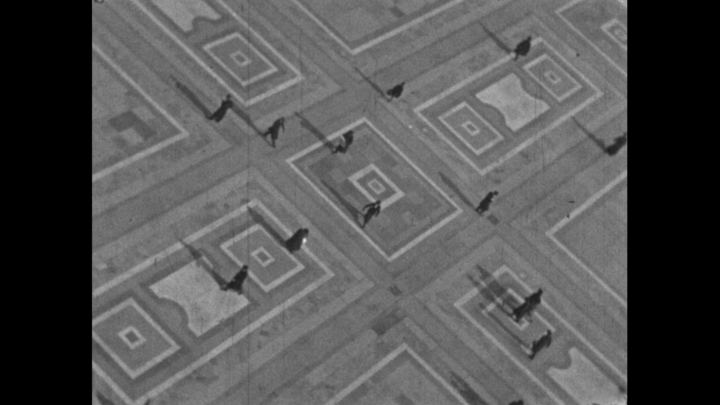 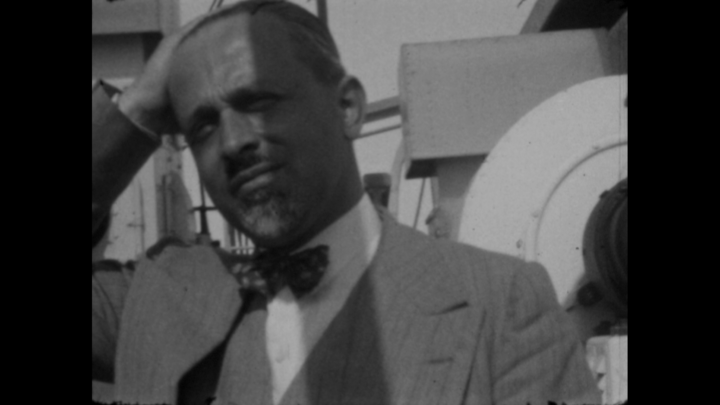 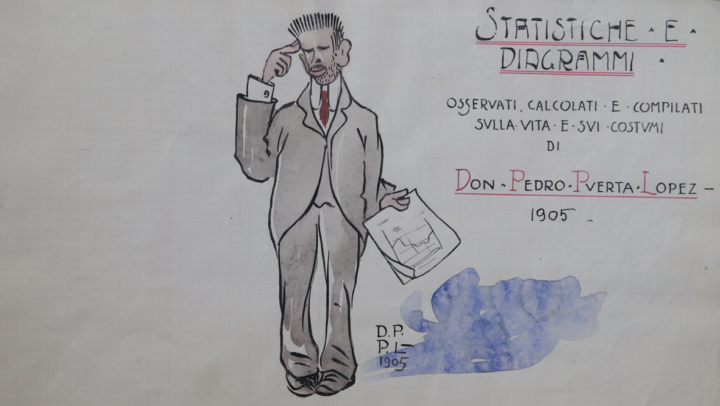 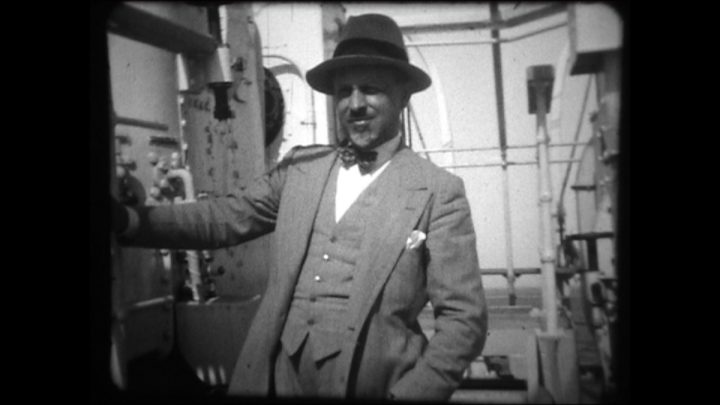 An elegantly dressed woman wearing a hat from the 1930s turns slowly towards the camera. The way she cautiously looks around discloses the secrecy of the encounter. She walks towards the lens, a little reluctantly, changes her pace, and takes two steps back, in line with the rules of seduction. She stops and poses, offering her profile so the camera gets a good shot of her.

L’Amatore (the Amateur) is the story of a seducer, a man with unusual obsessions, who buys a movie camera in 1929 and since then, does not stop shoot- ing and editing the world around him. His name is Piero Portaluppi and he was one of the most famous and important architects during Fascism.

Eclectic and agnostic, Portaluppi fabricated a per- sona of a thousand faces for himself, bolstered by natural talent and true ambition. His personal style towards the world and himself portrays irony. He lives the enthusiastic and ambiguous years of the growing regime from a distance. And at the same time, he allows himself to reach his full professional growth. He too gains success thanks to the excep- tional fortune that overwhelms a specific art design during Italy’s Fascist era, the one he is most commit- ted to, Architecture. Portaluppi is first and foremost the architect to the upper middle- class. A man who accomplishes everything he desires, success, power, women, talent, but during the war, he loses what is most important to him in life. History mercilessly interrupts the existence of the man. His son dies in the sea off Algiers. His creative vein is irremediably spent. History follows the portaluppinian thread and its predisposition towards restrictions, and at the same time it reveals the dramatic side of events, devoid of a happy ending. The line between magnifi- cence and poverty is blurred. Weakness and power.

The film arose from a fact. For more than thirty years since his death, Piero Portaluppi’s 16 mm reels, shot and edited throughout his life, had been locked up in a trunk. A tiny hidden treasure. This film is a reinterpretation of this film diary, much like a journal filled with notes that provides us with his view of the world. The architect’s attitude towards design adapts perfectly to the seventh art. Porta- luppi obsessively splices and puts together edited footage in veritable catalogues created throughout the decades. The human and cinematic material is rich in mystery. The reinterpretation of the archives penetrates the mysteries of somebody full of light and shadows.

The fragmented portrait revealed by the edited foot- age finds its counterpoint in the present world, his work shot today; buildings of great beauty and en- chantment. His architectural works become silent containers of our times, disclosing the role of an architect in the building of an identity.

In the film, Piero Portaluppi’s descendants live in the architecture he designed, leaving his habits and life- style intact. And they accompany us like presences and people in the reappropriation of memory.

“According to a legend, when Piero Portaluppi (1888-1967), a Neoclassicist architect, died, his daughter threw some mysterious boxes in the lake. True or not, those who made the film L’Amatore did not venture to say anything blamable about Portaluppi except for the fact that he joined Mussolini’s party – just to advance his career. They also show that the greatest tragedy of his life was the death of his beloved son, a pilot, who perished in 1942 over Algiers. In other respects everything went on well: Portaluppi’s talent quickly attracted attention of rich and powerful, he was overwhelmed with commands and his fanciful style has largely determined the aspect of the city of Milan. In 1944, the city was greatly damaged, with bombs hitting even the La Scala Theatre and the great Duomo of Milan, and after the war Portaluppi was active in building the new city. One of his secret masterpieces is the flat that he designed for himself, sometimes open to the public. The name of the film is L’Amatore (Amateur) but it does not mean a disparaging view of the architect. It is just the brand name of a movie camera: Portaluppi would just film everything he saw and the film is based on 16-mm films recently discovered in his archive. I tried to imagine a member of pro-Putin United Russia Party in his place filming contemporary Moscow but I could not remember any conformist architect who had build anything of value” – Dmitri Volcheck, Radio Svoboda

“Somewhere between a story and a biography, between architecture and a por- trait of a city, Maria Mauti’s first work has the ambition – and the courage – to escape from usual categories and tread little beaten ground. L’Amatore is not the official portrait of an architect and influential man of the Fascist period, rather it is a sort of daguerreotype that has the lightness of Guido Gozzano, its witty guis- es hiding illusions of an era that match those of the time in which we live. Maria Mauti is brilliant at balancing the solidity of the buildings and villas designed by Portaluppi and fantasy, so much so that whenever a real figure peeps into the shot one wonders if by chance it might be a ghost from the past” – Carlo Chatrian, Festival del film Locarno

“The highly effective combination of old footage and the new sequences turns places, architecture, objects and rituals in our everyday life into tangible proof of a less remote – but not less relevant – past” – Roberto Dulio, Domus

“The texts by Antonio Scurati, read by Giulia Lazzarini, with Maria Mauti investi- gating the apparent exuberance of Portaluppi, rightly leave us with an enigma of performed, ephemeral happiness, allowing us to doubt and at the same time to know a piece of history, cinema offers its priceless critical freedom, making for  an open piece of work” – Silvio Danese, Il Giorno