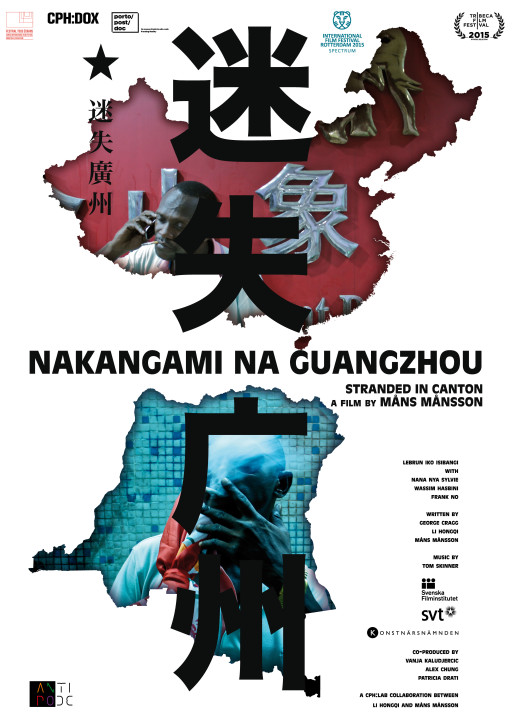 In recent years, the ancient trade center Guangzhou has become the number one destination for African entrepreneurs pursuing post-colonial trade
opportunities and a better life for themselves. Tens of thousands of sub-Saharan African merchants currently live in this mega city in the northern reaches of the
Pearl River delta in southern China. So large is the African business community that the Sanyuanli and Xiaobei districts are locally referred to as Chocolate City.
Trade anchored in consumer electronics and cheap fashion have supplanted dreams of tea and silk, which are now mere relics of the East-West paradigm.
Having lived and worked in the Democratic Republic of Congo, where I saw up close how the new dream of Guangzhou is shaping the lives of many SubSaharan
Africans – and how they no longer aspire to live and work in the colonial capitals of Brussels, Paris or London – I resolved to set the film within the African
diaspora in China. Developed together with Chinese director Li Hongqi (“Winter Vacation”), our aim was to depict the daily lives of African traders struggling to
make a living in an emerging business environment, which is by turns alluring and enslaving.
As an old friend from Kinshasa, I had always imagined Lebrun would make a good protagonist. By the time he landed in Guangzhou, he had gotten to know
half the people on the plane. 24 hours later, he was fully integrated into the Congolese expat community and on the hunt for business deals aside from our
work together. The film is anchored in a number of real life stories. Lebrun really did fall for Sylvie, the Cameroonian business woman. Wassim is, himself, a
logistics professional from Lebanon who we streetcast while shooting. And Frank
was initially hired to be the production translator. Lebrun is also an outspoken supporter of the Congolese opposition. His motivation in the film was perfectly
aligned with his personal political views. Overall, Lebrun found comfort in playing a character that had so much in common with the man he was in daily life.
The English title of the film pays homage to William Eggleston, whose 1973 video “Stranded in Canton” captures some of the most poignant scenes ever recorded.
It is unfortunately not a rare experience for African businessmen to become stranded in Canton, hence in Lingala, the language of the D.R. Congo, our
original title: Nakangami na Guangzhou.
At its core, this film is about the commodification of democracy or democracy as pure business but it is also a glimpse into a time and place where the old world
has been outplayed. The West is no longer on the agenda in Guangzhou.
Måns Månsson 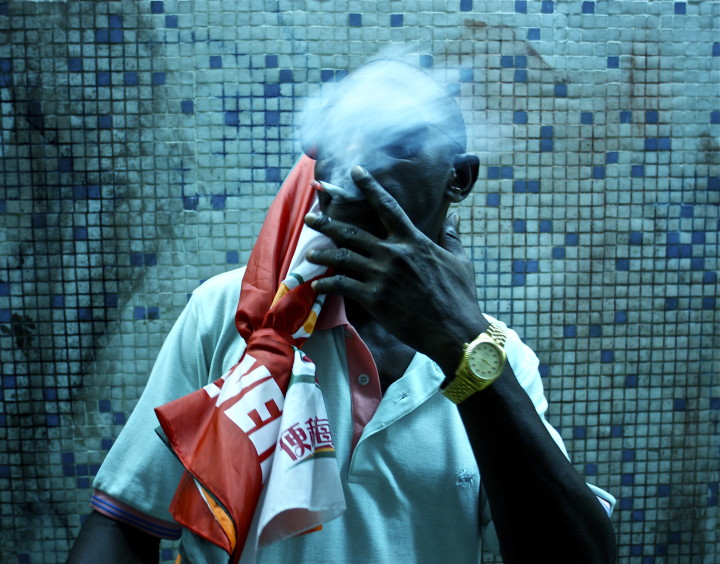 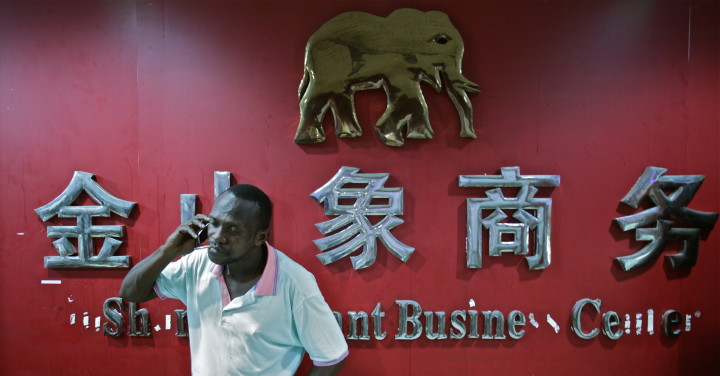 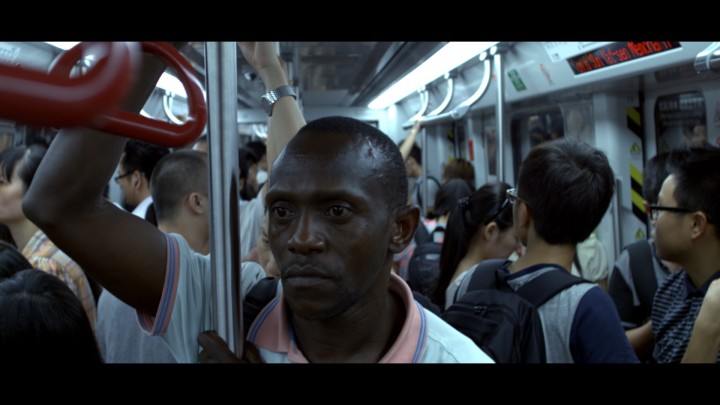 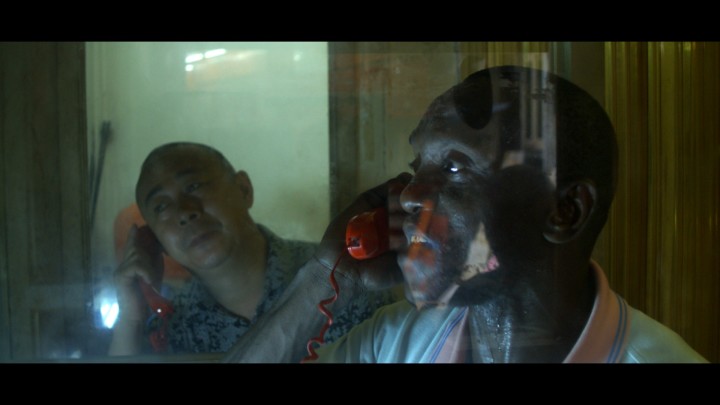 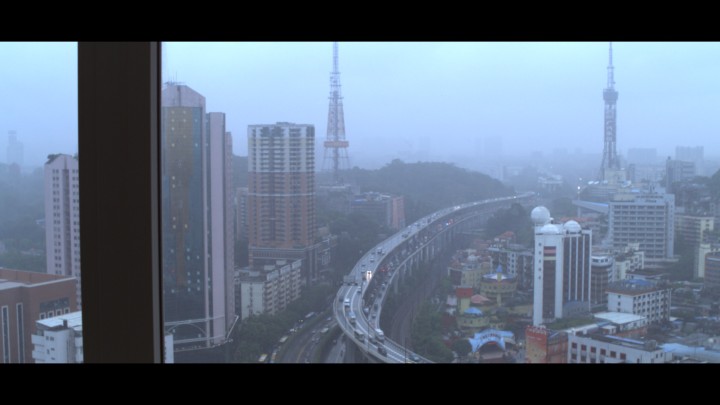 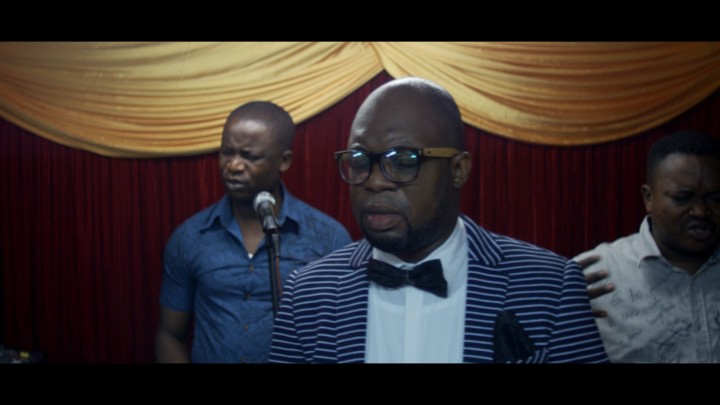 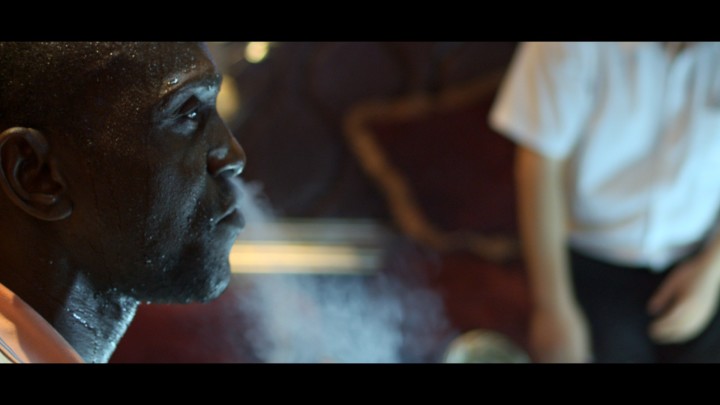 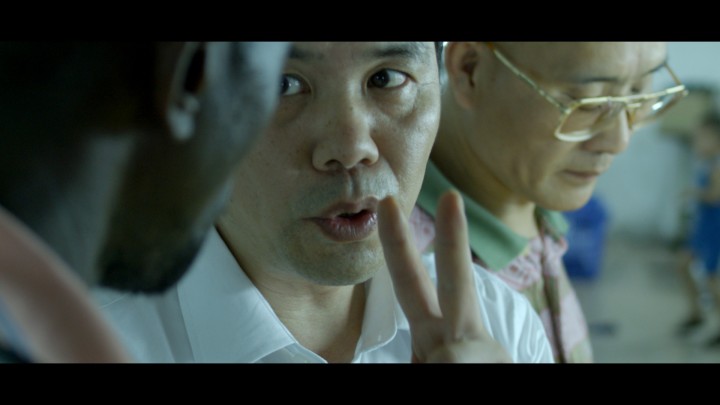 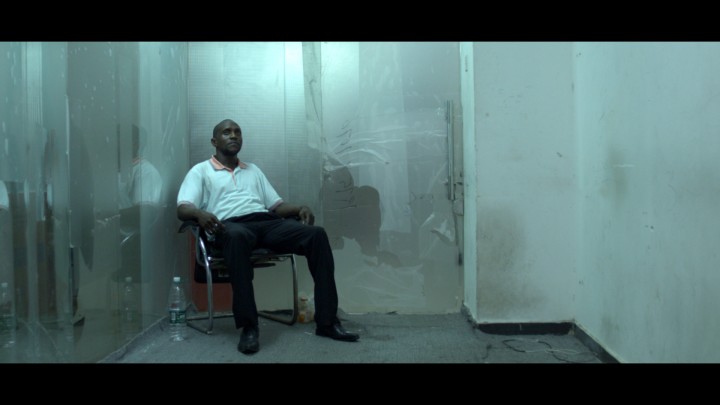 Lebrun is a new player on the burgeoning Chinese-African trade route, brokering in Guangzhou an enormous order for Congolese presidential campaign t-shirts. But he gets stung when the order is held up in production until months after the election.  Instead of returning to Kinshasa a rich man with a bright future, he remains in limbo in Guangzhou, facing nothing but mounting debts for warehousing the useless garments.  Inspired by the success of fellow Africans on the field and determined not to return to the farm, Lebrun develops a plan to repurpose the t-shirts and sell them to the opposition for the 2016 election.

Anthony Kaufman in Indiewire after CPH:DOX:

«Stranded in Canton», a wry hybrid fiction-doc about a Congolese t-shirt seller stuck in Guangzhou. At times feeling like a mix of Claire Denis and Jia Zhangke, the result is a strange, sad, funny and revealing portrait of displacement, and a new kind of globalization: East meets African.

Co-written by Chinese writer-director (and Locarno top-prize winner) Li Hongqi – a pairing born out of a project incubation program at Denmark’s CPH:DOX festival, where the completed film eventually made its bow last fall – Stranded in Canton, which hit Tribeca last week after screenings in Rotterdam in January, steers clear of convenient culture-clash clichés. The sight of Lebrun (Lebrun Iko Isibangi) navigating the quotidian in Guangzhou – learning Mandarin from a young woman who speaks perfect French, playing badminton with local pensioners in a park, singing Lionel Richie’s All Night Long in a karaoke – is never played for easy laughs.

Whereas He Has Come to the Promised Land…

COOL sat with filmmaker Måns Månsson to discuss “Stranded in Canton” during the 2015 TriBeCa Film Festival.

I thought it was very unusual: a Swedish director makes a film about African workers living in China. The theme of “belonging or fitting in” runs throughout the film. With globalization the world is quickly becoming smaller, what does belonging to a country or the world mean to you?

– Sweden is a very unnationalistic country to start with. Growing up in Sweden, you’re taught not to wave the flag because it could potentially harm someone—it has sensitive connotations. Or it’s a very subdued form of nationalism that has recently changed, though, very dramatically. We’re not really supposed to indulge in nationalism in that sense. Growing up, you’re fed ideas of being the conscience of the world, exporting democratic ideas all over the place. We would very much like to consider ourselves part of a global community, even though that’s not really the case. We’re just an isolated little thing up by the Arctic. Growing up in Sweden, you sort of struggle with that a little bit. But, for me personally, I don’t know, it’s a difficult question to have an easy answer to.

Månsson shoots in extreme close-ups with shallow focus.  He also pulls back to reveal a macro-view of the city.  Månsson’s lighting—ethereal, pungent, neon colors—evokes Christopher Doyle’s work, especially with Wong Kar-wai or Jim Jarmusch.  It’s not for nothing that the film title is an homage to a William Eggleston video.  The guy has an eye for the pictorial.

Månsson’s film Stranded in Canton addresses the sense of dissatisfaction that arises in a social context where as trade, investment and wealth are perceived to be growing, one’s humbler life no longer suffices and the fear of being excluded from the capital accumulation race kicks in.
As a tragicomedy bordering on the absurd, Stranded in Canton also explores the Sino-African culture clash without ever falling into clichés.

Lebrun is Månsson’s attempt to fuse documentary and fiction within film. While the film is explicitly fictionalised, the story depicted is the increasingly common geopolitical narrative of Congolese workers in desperate need of working looking elsewhere, frequently ending up in the East. In this study, there’s a notable absence from this film, and its the structures from which Månsson wanders into things: the West. It’s explicit. There are scenes of Congolese diaspora in Lebrun going to a church service, his interaction with Mr. Wassim another expatriate, and his interactions with his acquaintances-cum-friends. The only sign of the West is the frequent repetition of Lionel Richie’s All Night Long, its use veering from comic to tragic throughout the films duration.

There’s also an uncertainty on behalf of the film, in terms of whether or not it wants to be political. I don’t know much about the politics of Congo, but Lebrun switching the political allegiance of his cheap t-shirt line by putting profanities on it feels like more of a joke than a statement about either the country or the character, because the t-shirts could’ve been about a sports team that wasn’t very well liked and it wouldn’t have changed anything, but to say that the film is apolitical is a falsehood as well, since political messages are at the very center of Lebrun’s line of work. And of course, when this comes up as he’s sitting across from his Lebanese creditor, trying to convince him of his new business plan, and the political and personal dynamics are tossed out the window anyway since we only see the characters through the same hand-held close ups.